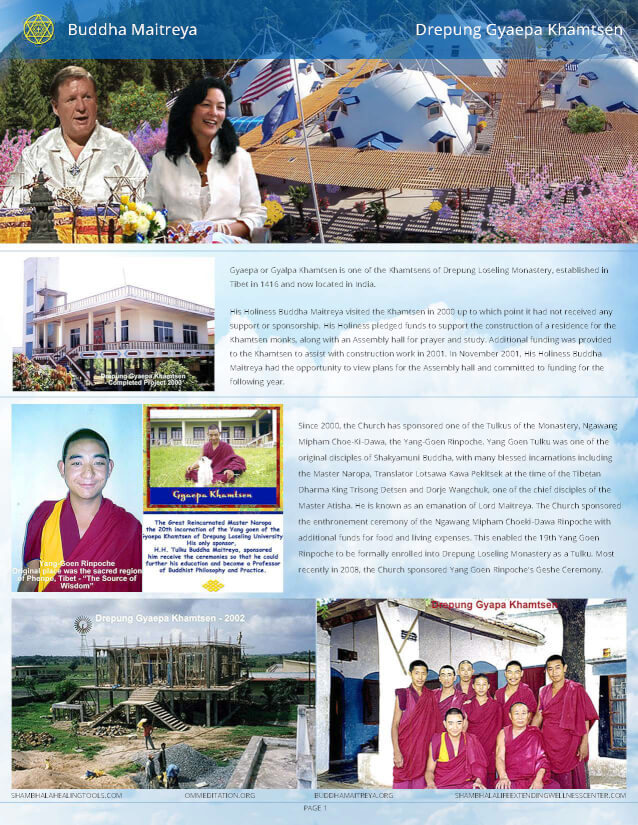 Since 1994 the Church of Shambhala along with its associated UK Charity “New Group of World Servers Trust”, which are both founded and directed by H.H. Tulku Buddha Maitreya the Christ and His wife Mandarava Tara have made extensive donations to Drepung Monastery in Southern India, and are now fund-raising for the next round of building work.

Drepung Monastery founded in 1416 was the largest of the Tibetan Monasteries and regarded as the largest Monastic University in the world right up to the Chinese occupation of Lhasa in 1951, housing up to 10,000 monks. In the 1950’s it was re-established in Karnataka State, Southern India. Its structure consists of “khamtsens” or houses which are based on the original regional affiliations.

The Church of Shambhala Vajradhara Maitreya Dharma Sangha is a 501(c)(3) Non-Profit American Buddhist Church with EIN 68-039-6112 and the Church's sister organization in the UK, The New Group of World Servers Trust, is a UK Registered Charity #1069944.

donate now
BACK TO ARCHIVE
Thank you! Your submission has been received!
Oops! Something went wrong while submitting the form